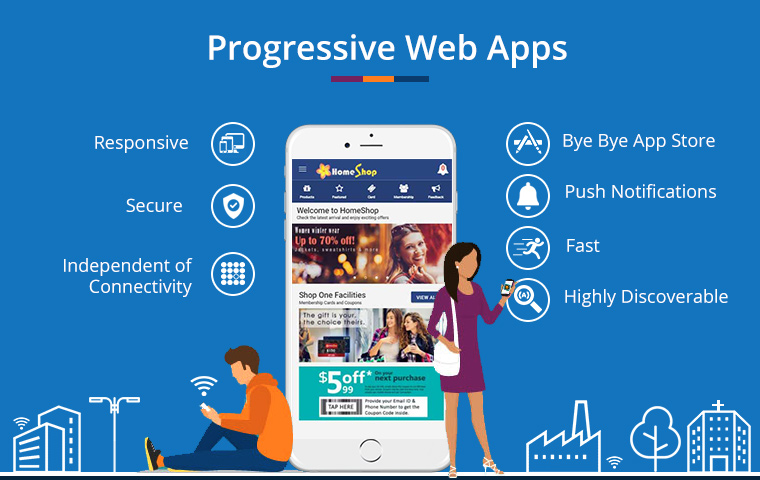 What is Progressive Web App

DreamzTech July 3, 2018
3 Min Read
According to a study conducted by Google,
“Mobile web reach is way higher than native app reach. It was 11.4 million unique visitors per month compared to 4 million visitors. Whereas the stats of user engagement with services showed that users tend to spend more time on native mobile apps compared to the mobile web. It was an average of 188.6 minutes on app against 9.3 minutes on the web.”
More and more user are now moving away from apps. Because of their bulky nature, users do not wish to download apps which require a lot of space but are used frequently.

Progressive Web Apps are the future of the world. Progressive Web Apps merge the web world and the native app world. Simply put, PWAs are the native app like web applications that are making everyone’s lives much easier. As complex as the name sounds, its usage is just as simple and smooth. Introduced by Google in 2015, Progressive Web Apps are revolutionizing the mobile experience for not just users but for various industries as well.
Brands like Twitter, Washington Post, Flipkart have already launched their respective PWAs and are effectively utilizing this technology to generate revenue and increase their customer base.

Let us have a look at some of the features which make Progressive Web Apps one of a kind:

Progressive Web apps are highly responsive. They adjust their look and feel, layout, etc according to the device they are run on. Unlike Native Apps, Progressive apps are compatible with all kinds of browsers available, irrespective of a user’s geographical location. Developers don’t have to adapt these apps for Android and iOS separately and hence these are extremely cost-effective too.

Progressive Web Apps are safer and more secure than traditional web browsers or native apps. Since are served via HTTPS, they are intercepted through service workers. This makes them safe against vandalization or tamperproof. They can be launched with just a URL.

The fact that they work even in low connectivity areas is probably one of the most attractive features of Progressive Web Apps. Independence from connectivity helps businesses reach a wider audience.

Progressive Web Apps eliminate the middleman “App Store”. Unlike, native mobile apps, PWAs do not have to be downloaded from the app store. Users can always access the latest features without having to constantly update it now and then.

They not only have a look and feel of native apps but with personalized push notifications, they are engaging more number of people. Users can add them to their home screen icon and access them anytime with just a click

The unique App Shell design make these applications much more reliable than native apps because they load faster which improves their overall performance.

PWAs have a very high rate of discoverability. Since these applications are identified as apps they are treated like the traditional web content. This helps brands save a lot of money on SEO.

Progressive Web Apps are bridging the gap between native mobile apps and websites. As the percentage of users uninstalling apps keep increasing, it is becoming absolutely imperative for brands to start launching their own PWAs for them to stand out in this competitive market. Benefits will only start touching the sky.

Here are some stats from businesses already using PWAs:

1. Aliexpress reported a 104% increase in conversion rates across all platforms. While their interaction rate increased 4 times, they also managed to gain a huge number of audience.
2. Twitter reported a 75% increase in tweets sent. While their bounce rate decreased by 20%, their pages per session increased by 65%.
3. Forbes reported an increase of 20% in their viewability. While their in-depth scroll improved by 3 times, their user engagement went up by 100%.
4. Lancome’s conversion rate went up by 17% and their mobile sessions saw an increase of 51% across all platforms. Lancome’s revenue generated from mobiles also increased by 16% year after year with a 50% increase in the overall speed.

Do you see potential use cases for your company or do you want to get some information from our experts?

DreamzTech Solutions Inc is a US based International software firm. The US division of the global network Dreamztech, is headquartered in Tempe, Arizona. Specializing in Web and Mobile based platforms suited for any size of business. From building a complete website or mobile app, to an Enterprise Corporate Solution Dreamztech Solutions Inc. can handle it. Our priority is to establish a long term relationship with our clients and deliver their VISION. Call us today to discuss your upcoming project @ (800) 893-2964.

What are the Web Development Trends of 2023?

What Does a Web Development Company Do?